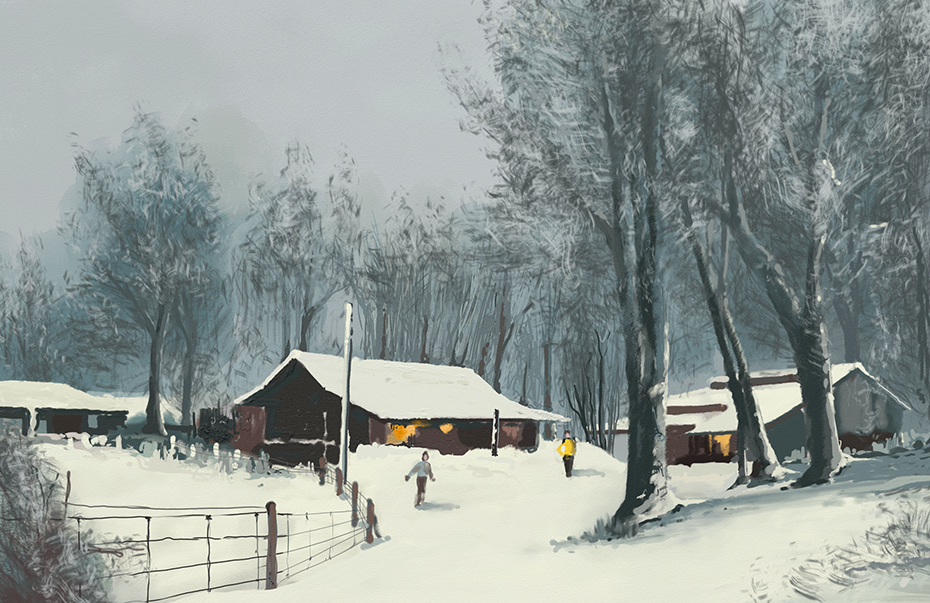 `Concept art is a form of visual art used to convey an idea for use in films, video games, animation, or other media before it is put into the final product. Concept art usually refers to world-building artwork used to inspire the development of media products, and is not the same as visual development art, though they are often confused.

Concept art is developed through several iterations. Multiple solutions are explored before settling on the final design. Concept art is not only used to develop the work, but also to show the project's progress to directors, and clients. The two most widely covered areas are science fiction and fantasy.` (from Wikipedia). 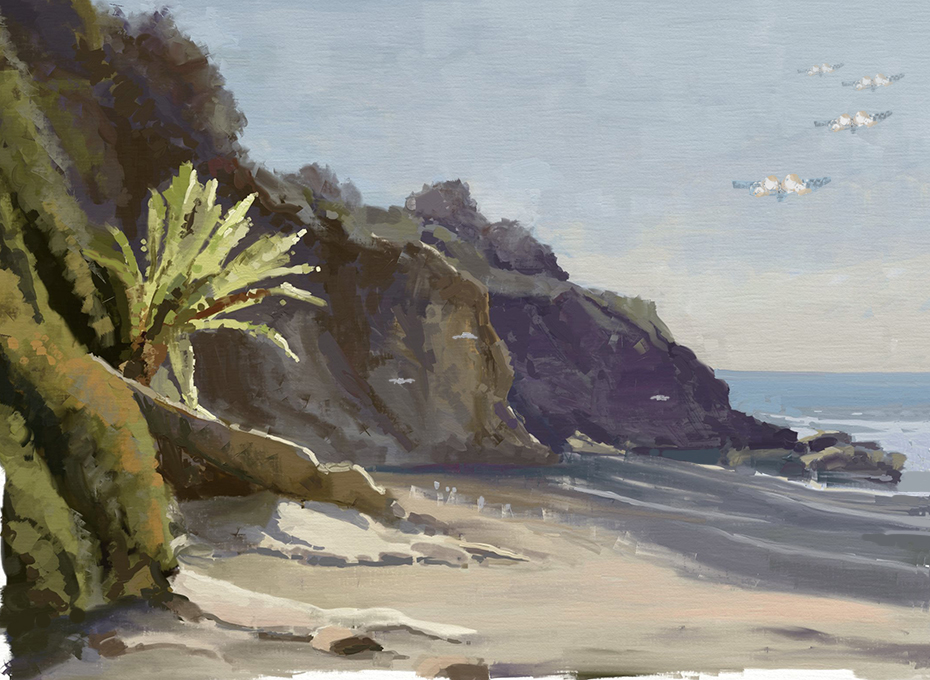 Aliens landing on a remote island. Four spaceships drop sixty aliens with there equipment on the beach of the lonely island. The spaceships return to the mainship in orbit.
The aliens will set up a basecamp to explore the island. They like to evaluate how much resources are left on the planet earth. We will design the basecamp on the island and the alien-spaceship. 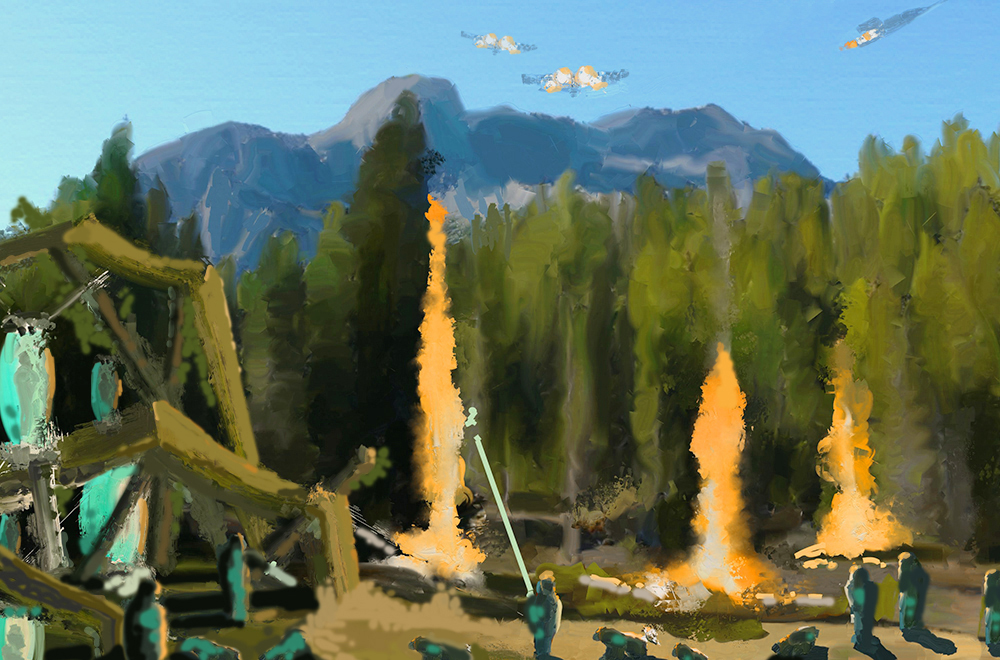 The basecamp is inside the island. The aliens sleep in hanging bags, filed with blue liquide-plasma. To keep themself warm they have to do a campfire. The aliens are blue illuminated inside there body, less blue means there power is low,-and they must go back to the hanging bags. They are aggressive, have advanced laser weapons and wolf-like guarddogs with them to hunt all invaders.
Three alien-spaceships arrive in the distant from the orbit. The aliens set more trees on fire with the laser to lead the way for the spaceships to locate the basecamp. Tomorow they will all explore the island and the surrounding sea with three spaceships. 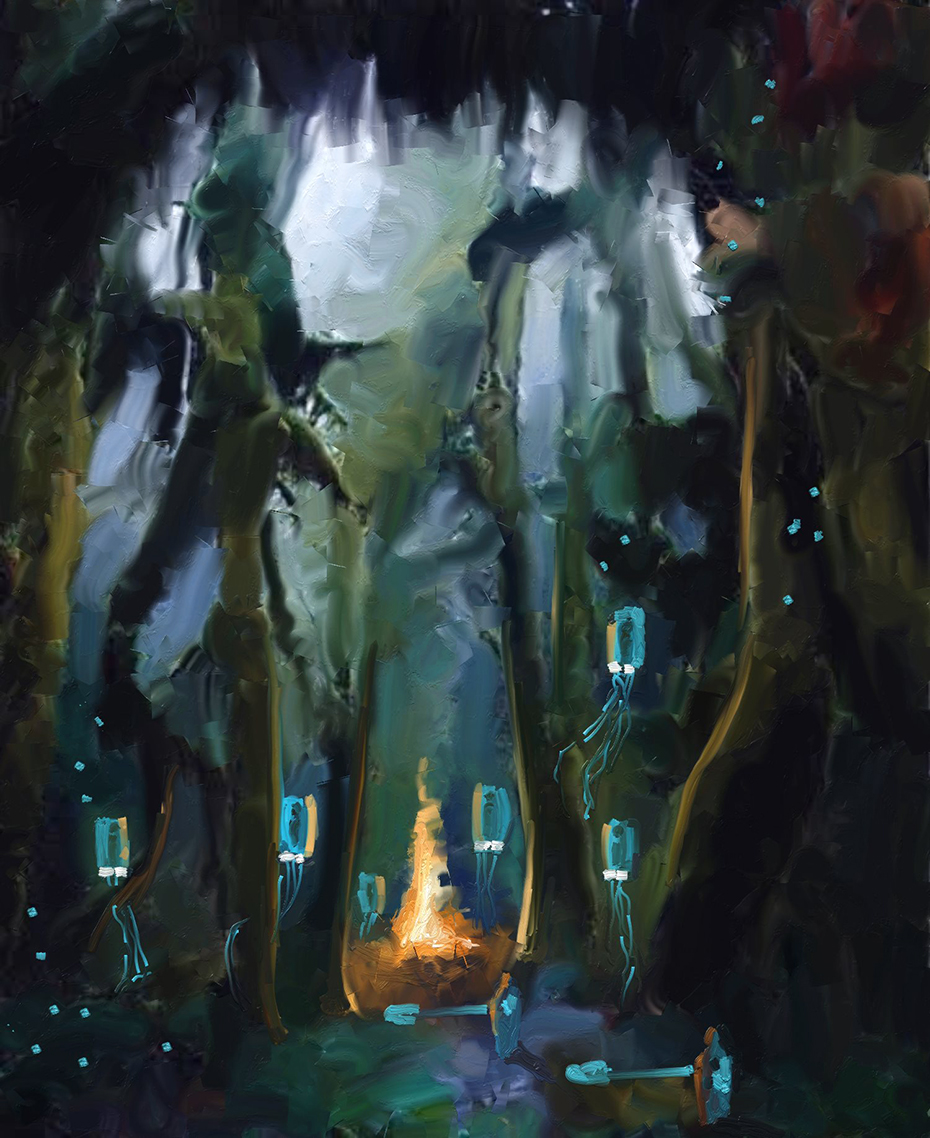 The small camps in the deep forest. The aliens hiding in the dark and wait for the next order from the basecamp. There are a total of sixty aliens based on the island. Blue illuminated drones search for possible invaders.
Alien-spaceship in action. The spaceship-explorer can fly to the earth and back to the mainstation in orbit. It can float in the sea for alien-divers to do scientific research. Twentysix alians with equipment can be on board the spacecraft. It is not a fighter-attackspaceship, but it still has some weapons built in for defense.
3D-CAD sideview-evaluation from the design of the explorer-spaceship. 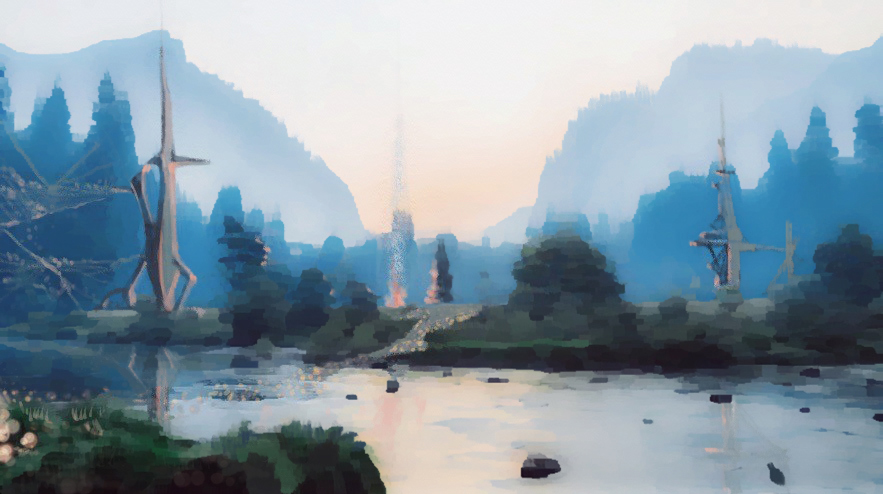 The aliens expand their habitat with new villages in the forest. Mainly they live in hanging-bags in the trees. 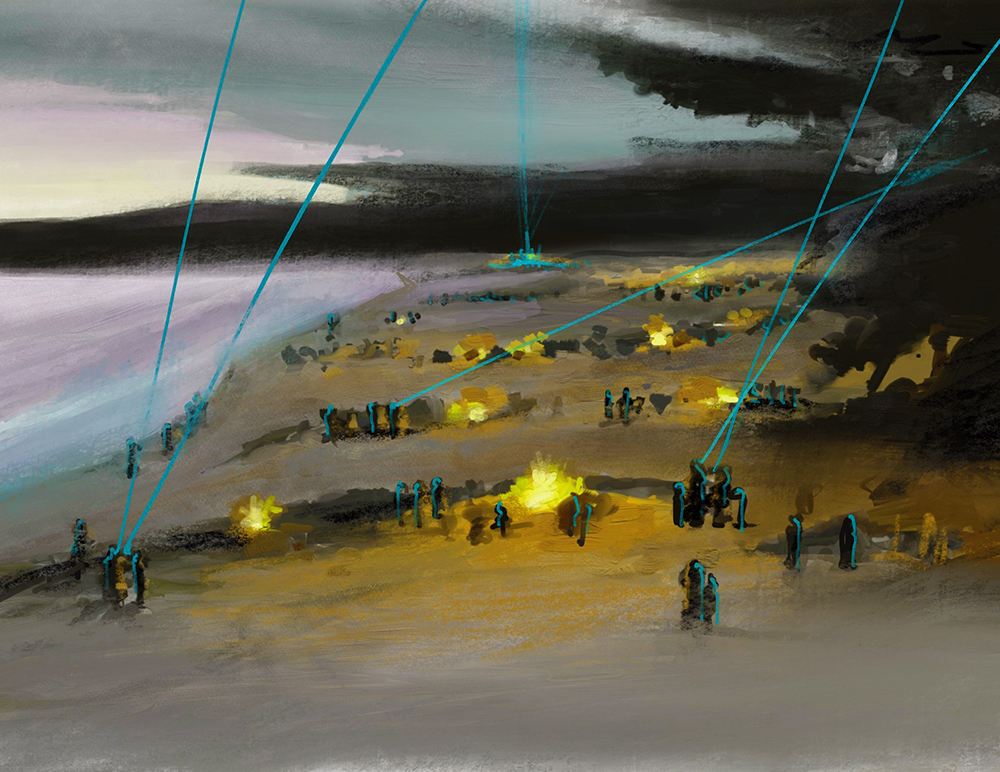 The new arriving aliens have a welcome-party on the island's beach.
Moodsketch. Inside the `hanging-bag` alien room. The bag-houses are hanging on trees.
Fighting the aliens at the island. The first landing on the islands shore.
Fight inside the island with the aliens. The forests are on fire,-the sun is not seen bacause of the big smog.

Secret himalayan Yeti Village in the high mountains. They have a unique architecture-village-style, hidden within the high snow and forest. We will work on the village-environment and the surounding nature. The village is in a deep forest-valley with a small creek.
Shangri-La is an inspiration for the Yeti Village. 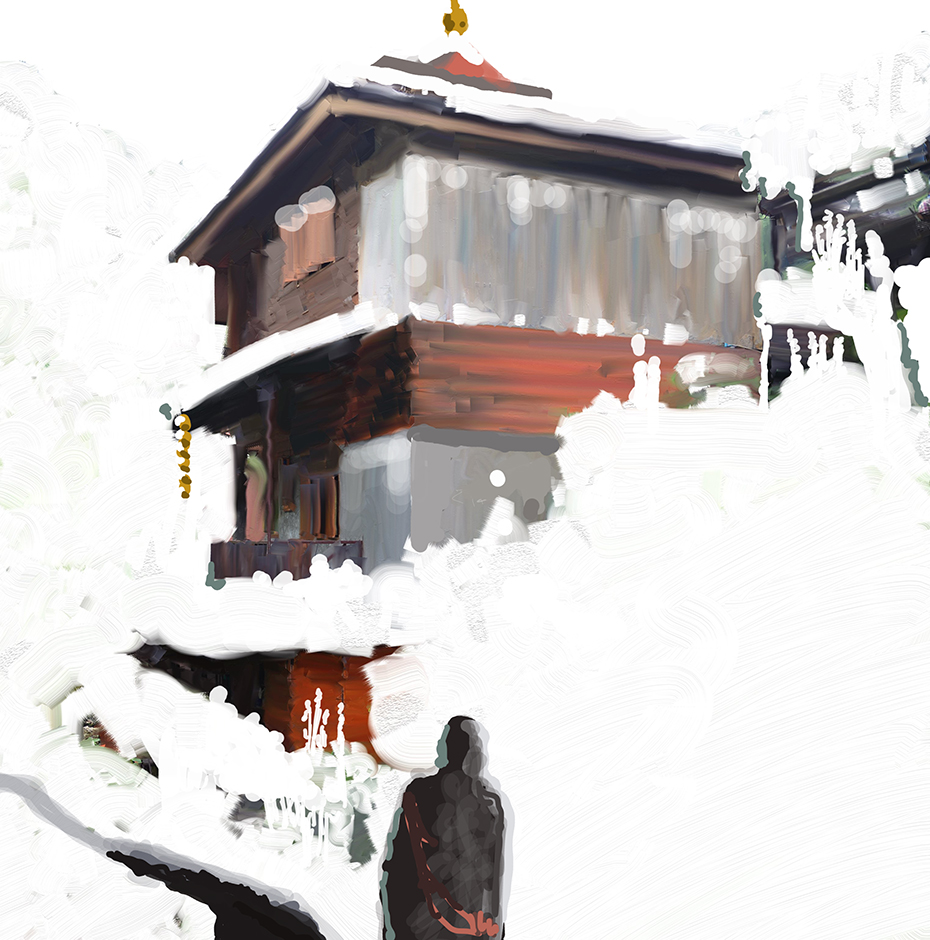 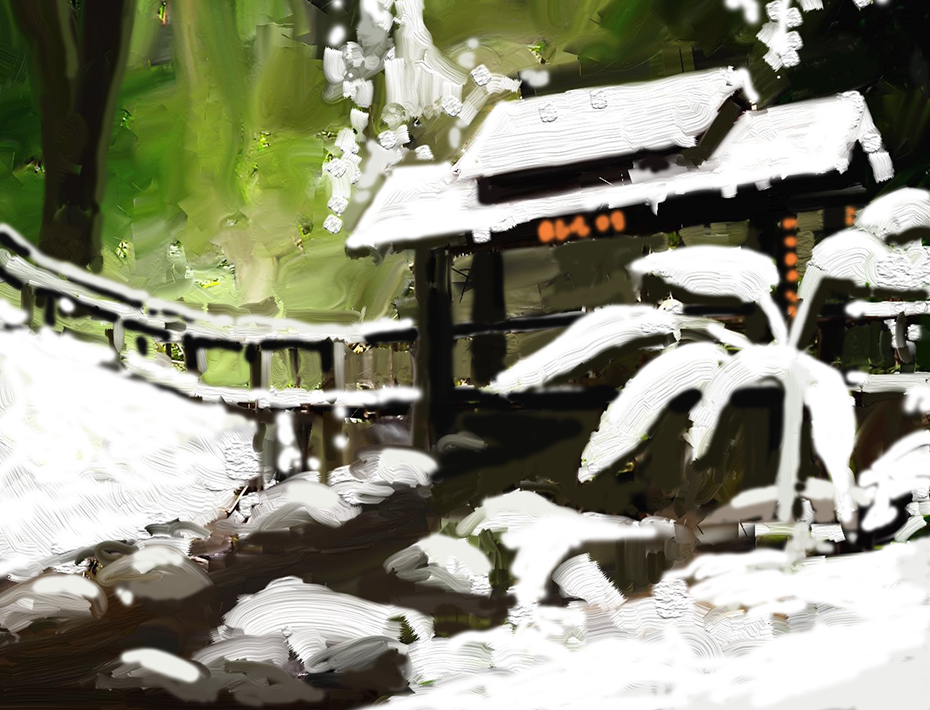 The Yeti village is to reach along a small way along the creek with a small bridge. The bridge over the greek is near the village-entry gate.
This is the center of the Yeti Village. The Yeti Village has onehundredsixty citizen and is the main village of the Yetis. In the village are about forty houses. Some smaller villages are in the same forest-valley and there are also twenty freestanding farmerhouses. The total population is fourhundred Yetis.
Topview over the main Yeti Village. The daily market and the citizen-infrastructure is in this village.